Devastation. Destruction. Distress: The controversy between AISD and RJ Construction takes to the streets and the lawns of Arlington

A local business claims they came to the rescue of a dismantled school district, yet no repayment comes to rescue the business. The business has resorted to putting signs in yards and hoping for support from the community to seek justice in the legal battle to gain payment for their work.

The winter storms of February 2021 wreaked havoc in Texas causing many people to not only lose power, but also experience severe damage to their houses and buildings. One building, in particular, Sam Houston High School, faced destruction from the chilling weather. RJ Construction and Roofing, a local business, said they jumped into action to help repair damages after receiving a call for help from AISD Assistant Superintendent of Faculty Services, Kelly Horn, though conflict has arisen over the lack of payment to the construction company.

After reaching out to members of the school board for an interview, I was directed to the marketing and communications executive director, Anita Foster, who was unable to answer any questions due to legal constraints. However, AISD did recently put out a statement concerning their side of the conflict with RJ Construction. Read the full statement here.

On Feb. 24, 2021, a bill, and an estimate was given to the AISD. In return, Jordan and his team received keys to the high school and began working to get the school reopened. On March 2, a procurement agreement, essentially a contract that officially outlines a buyer and sellers relationship, was signed by Horn. RJ Construction then received emails of gratitude for their work from both Horn and the environmental and safety services executive director, Corey Robinson.

“We had 37 team members there,” Jordan said. “We had team members from South Carolina, Tennessee, Missouri and Kansas that came to help. And then [Horn] and Corey both sent us emails thanking us for our hard work and the great job that we did to get those kids back in school. Then what happened after that was they refused to pay the bill. They had buyer’s remorse. They wanted to retrain the deal.”

In June, RJ Construction filed suit against AISD. Jordan said he offered mediation – a process in which a third party works to settle the dispute – twice, but AISD continued to deny the request, according to Jordan.

“Mediation can be an effective form of alternative dispute resolution,” licensed Texas and Illinois attorney who is not involved with the case, Brad Russell, said. “Mediations can take hours, days, or even longer to exhaust all efforts for the parties to settle. Mediation is typically voluntary unless there is some contractual or other obligation. Mediation can be pushed off for years or even indefinitely.”

Arlington ISD has made differing claims pertaining to mediation than Jordan and his team.

“Arlington ISD made the first proposal to mediate and has repeatedly offered to mediate since then, but RJ Construction has refused,” the AISD’s statement said.

A hearing was held in September, in which the district lost. The district’s attorney then filed to the courts that they would consider mediation again in 2020 to 2024. After losing the hearing, AISD declared that the lawsuit fell under sovereign immunity protection, which shields a government body from a lawsuit without their consent.

“It is absolutely possible for the AISD to claim sovereign immunity as a defense in the lawsuit RJ Construction filed,” Russell said. “In a claim for breach of contract, public entities in Texas can escape liability unless it clearly and unambiguously waived as a defense. But if RJ Construction can show that the AISD explicitly breached their contract, it may be able to defeat the sovereign immunity defense AISD raised.”

The district’s attempt to draw out the court process was perceived by Jordan as a way to make the business lose all of their money before any results can happen.

“AISD’s attempt is to outspend us and to bankrupt us to prevent them from having to pay the bill,” Jordan said. “So we are currently in the process of filing our appellate brief. We don’t expect our appeal to be heard until probably February or March.”

The AISD has made a different statement concerning their use of sovereign immunity.

“Language in a brief filed by Arlington ISD’s attorneys referenced RJ Construction (eventually) ‘losing everything’ as it relates to the appeal process and lawsuit,” the AISD’s statement said. “Arlington ISD is utilizing the defenses that are available to the district under the law, including immunity from paying inappropriate amounts that do not reflect the scope of services actually provided.”

Controversy has arisen regarding statements uttered in and out of the courtroom amongst the district’s declaration of sovereign immunity.

“The government doesn’t have to pay their bills, is what they’re claiming for their defense,” Jordan said. “That’s what they’re telling the courts. They’re telling the public that I didn’t give them paperwork, and that I refuse to mediate with them and chose to sue them instead, which is a flat lie. So they’re lying to the public, and they’re giving very little information to the courts.”

Though this case may seem like a vacillating drama, in which fingers are constantly being pointed in all directions, the issue boils down to the refusal to pay a large sum of money to a small business. Not only is the initial amount of money owed over a million dollars, according to Jordan, the constant legal battle has cost RJ Construction an additional massive amount of money, which has caused newfound financial risks.

“The AISD owes about a million to six million,” Jordan said. “Because of their delinquency, and because we’ve had to file suit against them, more than 25 percent of our accounts receivable, is in litigation. That has created some real problems with us from how we normally operate as a company. We have paid for a bunch of labor and materials that we never got paid for.”

The AISD has stated a different total amount of money for the claimed 191,000 square feet of work the construction company has done.

“According to a professional insurance adjustor, RJ Construction performed work valued at $179,520.54,” the AISD statement said. “RJ Construction has not provided the appropriate documentation.”

Though the legal battle continues, some community members have spoken out.

“We have a petition that we’ve had people signing,” Jordan said. “Number two is we put Pay RJ signs in your front yard. The third [action] is to email your displeasure to the school district.”

Many people have already started to show their support by placing signs in their yards and advocating for the business to their friends.

“We have shown our support for RJ by placing a PAY RJ sign in our yard, sharing on social media, and through conversation,” homeowner J’vette Helsel said. “After seeing his videos of work done at the school, and knowing how many schools and houses were affected by the storms, his company could have worked anywhere. They chose to jump in to support the AISD district so students could get back to classes. The company should be paid, they worked hard and long hours to get the school back open.”

Though Jordan has been an Arington-raised business owner of 15 years, he faces the novel adversity of navigating through legal issues for the first, and optimistically the last time, in his career.

“I’ve been doing this for a long time, a really long time,” Jordan said. “I’ve never had to sue anybody to get paid. This is the most egregious abuse of power I’ve ever seen in my life, and these are the people that are in charge of educating people.” 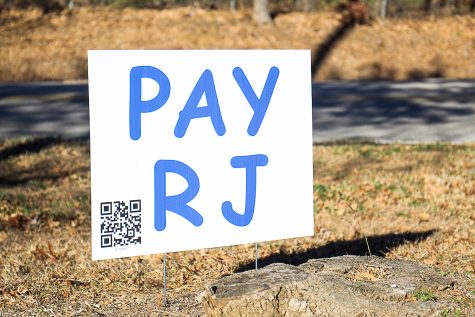