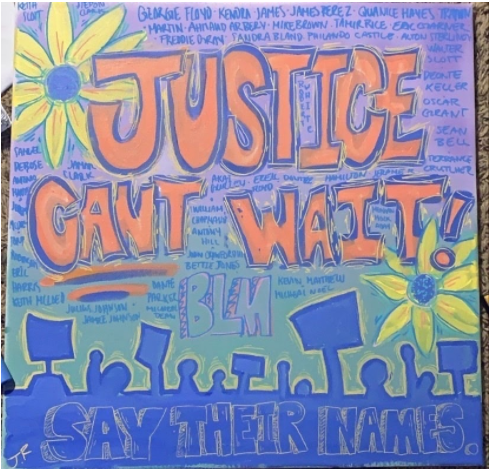 Students and faculty members who participated in Black Lives Matter protests this summer talk about their experiences.

“I just know being heard comes in numbers, and the least I could do was show up and acknowledge that the black community is being heard and that I’m listening. Seeing officers not getting penalized for their actions is so frustrating, so I wanted to actively show that I was in support of ending the violence.”

“As a person of color, I understand the struggles that are placed in front of us since the moment we’re born. As I was growing up, the clear difference people were making against people of color was becoming clearer and clearer each day. It saddened me that as our current president was making it a bit more okay to be public with racism. At one point, a supporter of our current president decided it was funny to kick the chair I was sitting in and ask if I was overjoyed with our president. I knew that what I experienced is only a small fraction of what the BLM movement faces. I am fortunate enough to not fear for my life when I am stopped by the police. No parent should ever have to fear for their child’s life when they walk out the door. Seeing the injustice and having experienced racism I knew to stand with the BLM movement and support as much as I could and continue to do so.”

“Protesting to me was a way to use my voice and the obvious privilege my skin contains for good, instead of sitting complicit in silence. While my friends and family are being murdered for their skin color.”

“Every time I went I made sure I packed two or three extra masks, just in case other people needed them. I would try to stay away from other people and take photos from afar.”

“I knew disclosing that information to my students might elevate my profile and invite scrutiny from parents and administrators. For my students, I was demonstrating that community service is important for adults to practice and not just preach. I also disclosed my participation to the district as I volunteered to join their focus group on eliminating systemic racism in AISD. I had never participated in activism before this; it had never occurred to me that to not be racist in thought or deed was not sufficient. In fact, to participate in activism and possibly being arrested for a lawful, constitutional act of dissent had always seemed like an unacceptable risk.

But that is at the heart of the problem, isn’t it? After George Floyd’s murder, I finally began to understand the scope of the problem, and I became aware of blind spots in my understanding of our national narrative on race that was placed there intentionally by the narrators and people in power who favor the status quo. Another MHS teacher, Stacy Campbell, helped me understand that it was necessary to be actively anti-racist. I joined her activist group, 10 for Change, just before the June 14 march.

I had been considering traveling to other locations to protest already, but my wife was very concerned then because the protests were fresh and the police were acting in precisely the way people were protesting against. We were concerned I would be arrested just for being there which could put my teaching certificate at risk. When I found out that students from our campus were participating in a local protest, I could not forget my duty to protect them. I have always felt very strongly about that. I have considerable training in third-party protection. I wanted to be on the scene in case the police did anything they should not so I could be witness to it and protect as much as possible any students who might be harmed if it suddenly turned violent. To their credit, the Arlington Police Department behaved impeccably and I applaud them for that. I was very nervous in the moment, however.

After the main march concluded, the students from Martin continued to the I-20 bridge and back. I masked up and rode anonymously alongside them on my mountain bike for all seven miles. I wanted to be mobile so I could monitor the march from front to back and try to watch out for everyone. Lashed to my handlebars was a sign with lyrics from Bob Dylan’s “Blowin in the Wind.” It read: ‘How many roads must a man walk down before you call him a man?’ and ‘Black Lives Matter.’ I think ‘matter’ should be the minimum. Their lives should be respected, cherished, and valued. That some people still cannot accept this fact about fellow Americans is appalling to me, and so I finally became actively anti-racist.

I practice the inclusion of all students placed in my care, and I extend that inclusion to every student in our school, but this is no longer enough. I want to force the issue of inclusion of all eligible people everywhere I see it not being practiced. I want equity for all. Many groups of people are excluded for their color, culture, nationality, disability, mental illness, and many other reasons, but one group seems to practice almost all the discrimination and exclusion. Through no choice of my own, I seem to ‘belong’ to that group, and so I must do more.

People in this group seem unable to understand that they cannot judge someone who has had a significantly different palette of choices to choose from and that the palette itself was not of their choosing. All these disenfranchised people are just me living a different life, so I must treat them as I want to be treated. I must validate their worth as I wish mine to be validated, and advocate for them and break bread with them. This is so basic, yet so few people in my ‘group’ seem to understand because they are not being oppressed. Bob Dylan also helped me understand that supporting people who are being oppressed is not necessarily being political. I have donated to BLM, I believe their cause is just and it is time for our country to embrace the opportunity for everyone and finally show the world the best example of democracy and equality in the world.”