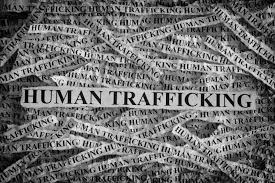 What is human trafficking?
Human Trafficking is an increasingly threatening issue in society today. It’s not a foreign problem that we can get away from by hiding in our little safety bubbles of innocence. It is a real issue that is present here in the U.S., here in Texas, here in Arlington.

Chris Webb, a sergeant for the State of Texas Attorney General and former Dallas SWAT member who has served many warrants on human trafficking cases, provided insight on the topic of Human Trafficking.

“Females are the ones that are most commonly involved in human trafficking, especially for sexual purposes,” Webb said. “Males, if they’re involved, are used mainly for forced labor.”

Traffickers are looking for vulnerable people to take as victims. People can be most vulnerable online if they’re not careful about what they post, making them subject to the trafficker’s schemes.

“Younger people are more susceptible to being roped into trafficking online,” Webb said. “They want to escape their rough home life and look for a way out. When a trafficker reaches out, it makes them feel like someone cares and wants to listen.”

Traffickers pick specific places to watch for and capture victims. These are places that their crimes will not be noticed as easily.

“Any malls or water parks are going to have high rates of kidnapping because kids are left to run around by themselves without any adult supervision,” Webb said. “Traffickers use this as either a time to observe and then later track kids down or they take the kids then and there.”

Going in groups of two or more, whether to the bathroom or inside a store, is beneficial to avoid being taken, Webb said.

For adults, it is more common to be taken advantage of at a place of business, like massage parlors.

“Massage parlors that are involved in trafficking are a common thing,” Webb said. “People come in to get a massage and end up with more than just that.”

Traffickers will take advantage of the fact that massages are usually done with a minimal amount of clothing on and will use people for more than just a paycheck.

After being taken, most traffickers keep their victims in large groups. This happens especially when families are taken after entering the country from a foreign place.

“Nail salons are common as well,” Webb said. “Foreign people will be forced to work there in groups and because they don’t know much about the U.S. and they speak a different language most times, they don’t know any different.”

The victims are kept together in large groups. They are transported to work and then back to the housing where they are kept. They don’t ever leave otherwise and live a very restricted life under the oppressive power of the trafficker.

While in captivity, victims are often kept in a certain state so that they are oblivious to what is happening around them and the crimes can be done with less resistance.

The victims become compliant and don’t realize the danger of their situation. After being arrested, traffickers are charged with different things depending on what they used the victims for.

Once the operation location is found, both traffickers and victims are taken in by law enforcement for questioning.

“Even though it may appear that the victim is getting in trouble, they’re placed in handcuffs and escorted out, the police are just trying to get everyone out in an organized way,” Webb said. “Usually, what ends up happening is once the detectives start investigating the case and deduce that the person is a victim, they are released and given help. The Texas Crime Victims Compensation (CVC) is a group that is dedicated to helping trafficking victims. A large portion of state law enforcement funds are dedicated to this.”

Victims are put into programs like this to help them get back to a somewhat normal life. A lot of victims tend to revert back to their bad habits after being released because it was part of who they were for so long. These programs give them a community to rely on and jobs to support them so that they can find new, healthy habits as a part of their new life.

How do they lure people in?
Since 2007, more than 49,000 cases of human trafficking in the US have been reported to the National Human Trafficking Hotline, which receives an average of 150 calls per day. Young adults and children are swept away to foreign countries to be used in modern-day slavery. If more people are aware of the tactics and methods used the more prepared they can be.
One of the most used methods is a tactic called “Loverboy.” Handsome men seduce and date young women. The loverboys use pretty words that promise a beautiful future together to gain a woman’s trust. Soon after, the loverboy reveals their true colors by threatening, abusing, and blackmailing their victim into submission. By the time the women realize what they are involved in, they are in too deep to leave or are too scared to.

Something else to watch out for is false job advertisements. Traffickers post hard to pass up job opportunities in legitimate newspapers under the front of a registered business. The victims fly to foreign countries for the jobs promised to them with their legal documents. Once the victims land the traffickers take their documents and they start a process called “breaking in.” “Breaking in” involves a series of emotional, physical, and psychological abuses such as rape, torture, threats, degradation, and the forced consumption of drugs and alcohol. This happens mercilessly during the acquirement period to break the spirit of trafficked victims. Survivors have also said that shortly after arrival they witnessed the murder of other victims. This causes victims to go into a self-preserving state of compliance.

Despite what movies portray, being abducted or sold by their family is a rare occasion. This is because abduction makes it harder to transport someone. Abducted victims are more likely to attempt an escape during the transportation phase of trafficking and being sold by family only happens in countries stricken by poverty and desperation.

To combat all these tactics, being cautious and vigilant is the best way to protect yourself in cases like these. Always tell someone where you’re going to be when you’re going to a job interview and be careful of who you date. For more tips to keep safe check the story over prevention.

Precautions you can take
Although human trafficking is a reality, there are many precautions you can take to prevent becoming a part of the rapidly rising statistic. As we fight to find effective ways to end the expansion of trafficking, we can be intentional about our actions and support organizations that have an immense impact on helping victims.

Small actions can greatly influence the outcome of a situation. A simple – yet one of the most important – precaution is to be aware of your surroundings. Make it a habit to always know what’s going on around you and it could save your life or someone that is near you.

Traffickers pursue the easiest targets, such as those who are oblivious and wouldn’t catch the warning signs, which is why it is important to not let our guard down. Get off your phone in public, don’t leave your belongings unattended, and lock doors, such as bathroom stalls and doors to your house, behind you. Try to make a conscious effort to stay safe.

Public parking lots are common places for getting trafficked because it is easy to get away and blend in with all of the other cars. In an attempt to prevent this from occurring, park in well-lit areas at night, preferably closer to the store. In addition to where you park, glance under your car as you walk back to it, and look out for any suspicious differences from when you went inside.

Even after following the previous precautions, if you find yourself in a suspicious situation, speak up. Ask others for help if you feel uncomfortable, and never let someone get away with an abduction without causing a scene.

It is vital to acknowledge the signs and identify red flags, whether they are out in the public or online. Be intentional when using the internet and be very cautious of whom you trust with your information.

While there are not very many ways to personally help these children and teens that have been caught up in the trafficking industry, many larger organizations play a big role in helping these victims receive justice. Donating and supporting reliable sources, along with spreading awareness are some of the most impactful actions we can take when facing this battle with modern-day slavery.