Students and teachers talk about finding out about Santa 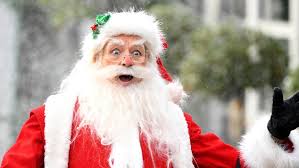 Christmas is a time everyone looks forward to. Most of the time, kids are most excited for the legendary character known as Santa Claus, who brings presents to the homes of well-behaved children. But what happens when those hopeful children find out Santa isn’t real?

Junior Sara White found out that Santa wasn’t real while spending the night at her friend Anna’s house in 2012.

“Somehow the subject of Santa came up in the conversation between Anna, me, her mom, and my mom,” White said. “Anna’s mom said something along the lines of, ‘Anna doesn’t get gifts from us at Christmas because it’s her birthday.’ My mom caught her breath and tried to quietly tell Anna’s mom that I still believed in Santa.”

White said she was pretending to know when her friend ended up revealing the truth.

“I just pretended like I didn’t believe. The whole way home my mom had to explain that Santa was in fact not real, and she was sorry that my friend had ruined Christmas for me.”

However, White said that it was fine that she figured out Santa Claus wasn’t real.

“Honestly, it was probably good that I learned the truth that day because I couldn’t figure out why I wasn’t getting what I asked for,” White said.  “It’s a miracle I didn’t find out sooner because I have two older brothers.”

Despite figuring out about Santa Claus when she was young, White said that she wants to make sure her future kids get to enjoy the same experience.

“I’ll definitely keep Santa a secret from my kids because it’s a classic tradition.” White said. “But there has to be a better way for Santa to ‘exist’ without making him into a person. I would rather my kids have ‘gifts from Santa’ knowing that it’s a holiday tradition, without turning Santa into this cruel lie, almost like a secret admirer, because making kids believe in someone fake can probably build lots of trust issues.”

Junior Britney Vo was ten years old when she figured out that Santa Claus wasn’t real through her older brother.

Vo said she was disappointed by the truth but not surprised as she was getting older.

“I was already skeptical around that age so it was sad but not surprising,” Vo said. “It was getting to a point where I was growing out of that idea.”

Regardless of the disappointing truth, Vo said she will keep the fun tale around for the future.

“I’ll keep the secret around for the sake of tradition of course.”

Freshman Sanai Haymon said she always figured that Santa Claus wasn’t real since some of the things he did didn’t make sense to her.

“I never even lived in a house with a chimney, so I didn’t know how he was gonna get in to begin with,” Haymon said. “My old teacher tried to tell me he climbs in through the sink pipes but how would he fit? He can’t come through the door either because we had our own alarm system – a dog.”

Haymon said that school was where she fully realized that Santa wasn’t real.

“School is the culprit because they were the main ones telling kids these fake stories,” she said. “My parents never tried to lie to me about it.”

Haymon said she was fairly nonchalant about the situation and wished she knew about him before.

“I would have prefered to learn about him earlier because I would’ve known he wasn’t real from the beginning and then I wouldn’t have to deal with hearing it from someone else.”

Unlike the other students, Haymon said she would prefer to tell her future kids the truth.

“I’d definitely tell him he’s not real,” she said. “It’s too exhausting to try and lie to kids for a long time.”

Science teacher Amy Dragon was around the age of eight or nine when she found out about Santa.

As for her three kids, Dragon said she didn’t tell them about Santa herself.

“They believed in Santa when they were little, not because I told them he was real, but because other people did,” she said.

Unlike others, Dragon said she would tell her kids anything if they asked for an answer.

“I never told them he wasn’t real, but if they asked me directly, I explained how he was an imaginary person who did wonderful things for children,” she said. “I was adamant when I had young children that I would never tell them lies, because I wanted them to know that they could always come to me for a straight answer, about anything.”

However, Dragon said her oldest child found out about Santa by herself.

“My daughter found out one day when she got into my closet and found the Santa wrapping paper we used for her gifts from ‘Santa,’” she said. “She brought me the paper and said, ‘I knew he wasn’t real!’”

As for Dragon’s other two children, one had realized it by himself while the other was adamant about finding out the truth from his mother.

“I don’t know when my middle son realized it,” Dragon said. “But my last child asked me over and over if Santa was real when he was six and I dodged the question as long as I could since he was my last baby, but eventually I just told him the same thing I told the other two.”

Junior Jessica George found out about Santa at the age of eight while on vacation.

“So we went overseas for Christmas vacation,” she said. “After a super long flight and terrible airport experience, we finally got to the place we were staying at. My mom was super upset and she sat us down to tell us something. My parents decided to bring our gifts with them so we could open something on Christmas, but they got stolen. My mom didn’t want to ruin the illusion; she said that she asked Santa to deliver the gifts early so they could take them with us on the trip, but they got lost. It was the worst day.”

To say the least, George said she was extremely disappointed to hear the truth.

“I started crying because I just knew that Santa wasn’t real,” George said.

To add to the emotion, George said she felt confused since she was still young.

“It was just extra confusing as I got older because a lot of kids still believed in him and I didn’t really know what to think.”

Despite the unexpected Christmas fail, George said she’ll keep the tradition for her future family.

“I probably won’t tell them that Santa isn’t real but I won’t base Christmas completely off of him.”

Freshman Christian Ferretis found out Santa wasn’t real at the age of nine.

“It was five years ago, shocking how I recall I suppose,” Ferretis said.

As a curious child, Ferretis decided to stay up late on Christmas Eve.

“I stayed up late when I was younger to see Santa because I really wanted a game and so it was two in the morning and I hear footsteps so I go and sneak behind the couch with cookies in my hand and I peek around the corner of the couch and see my mom struggling to move the elf on the shelf to a higher spot while my dad is placing Christmas presents with a Santa hat on.”

Ferretis’ reaction was lighthearted, as he said he found the experience to be helpful.

“It was shocking but I found it funny mostly,” Ferretis said. “I think it was a good time to learn.”

“I’d keep it a secret until they find out on their own so they can have a good childhood.”

Junior Jennifer Nguyen found out about Santa in the second grade.

“I literally launched an investigation on my mom because I saw her handwriting was similar to my letters from Santa,” she said.

Determined to find the truth from her mother, Nguyen said she examined all the evidence.

“I bought a magnifying glass and looked through her files to compare writing and secretly called her coworkers to interview them one-by-one,” Nguyen said. “I wrote a report and presented it to my mom so she would confess. It was a whole interrogation.”

Once Nguyen found out, she said she felt tricked.

“I felt betrayed, no wonder Santa also knew Vietnamese,” Nguyen said. “I wish I learned later because she stopped giving me Santa gifts after that.”

When asked if Nguyen would continue the tradition for her future kids, she said she would be very happy to.

“Will I pretend to be Santa like my mother? Because yes I will.”

Science teacher Heather Sanders said she remembers the last Christmas in she believee in Santa.

“I can remember the last Christmas that I still believed and that was second grade because I remember thanking Santa so much when I got a Miss Piggy watch,” she said.

Although Sanders said she doesn’t remember how exactly she found out Santa was fake, she made very good assumptions as to how she did.

“Probably the same way most kids do – a Grinch of a friend or my older sister,” Sanders said. “Most likely, my older sister. She was always, and still is, a buzz kill.”

Sanders said she had a bit of a hard time keeping the secret from her two kids.

“I have two 11-year-olds,” she said. “One still believes and the other gave up this year. He figured it out after two back to back Christmases of parents fails. One, I left the packing slip addressed to me in the box and two, he heard his dad talking to another person about where he was able to get the football tickets from.”

However different people may be, Sanders encouraged us to follow our own beliefs.

“My go-to phrase is that Santa is in your spirit, if you want to believe, by all means, go for it. Why not?”