The journey of Hamlet 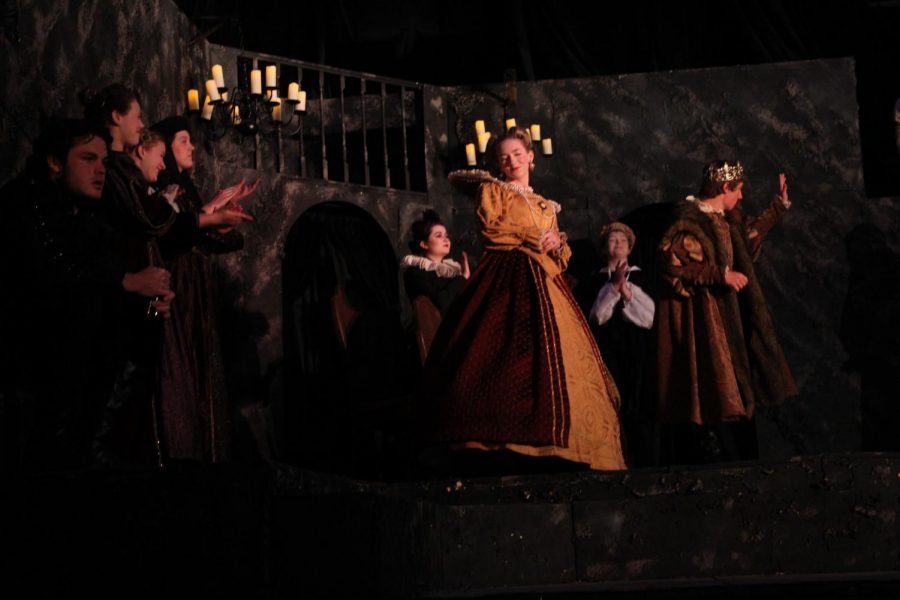 “Places for Act 2!” calls senior Allie Shafer, the stage manager for Martin’s production of Hamlet. Hamlet has meant everything to these performance-hungry theatre students.

“My favorite part has been watching my castmates put their heart and soul into everything they do as soon as they step on stage,” said junior Livvy Monk, who plays Guildenstern in the cast, “They are some of the most talented people I’ve ever had the opportunity to work with and I am so incredibly proud of every single one of them.”

Covid has stripped many students of their extracurriculars. Theatre took a big hit when they found out they couldn’t do Grease at the end of the 2019-2020 school year.

“We didn’t even get to start heavily working on Grease, but it would’ve been my first musical here at Martin and I wish I could’ve worked on one last show with the seniors and see more of their talent before they left,” props crew sophomore Analee Tinajero said.

After the unexpected Grease shutdown, the theatre department started the 2020-2021 school year trying to put on the show Dearly Departed, a comedy about a family of overly exaggerated southerners at a funeral.

The show got about three weeks into rehearsals before getting shut down because of Covid crackdowns.

“I was really really heartbroken when Dearly Departed got canceled because I had worked really hard on it,” says senior Jakob Jankowski, Laertes in the cast. “We had it all memorized and everything, and then all of a sudden when we were blocking it, it just got canceled.”

“I was a little disappointed that it had to get canceled but now we get to do this amazing production,” he said.

After Dearly Departed ended, the show must go on. Auditions for Hamlet were advertised to actors, but the day before auditions the directors, Jordan Chambers and Kelly Groves,  made a very important decision.

“We begin the school year with the hope that we could produce shows safely in a fashion that would benefit the students and our community. When the restrictions to produce a show became too stringent, we both saw that it was not going to be a possibility. That broke our hearts. As we moved through the year, we still held out hope for UIL One-Act Play” says director Jordan Chambers.

So with that, Hamlet was over before it even started, and One-Act was in.

UIL One-Act Play is crucial to the theatre department and a lot of dedication is put into this competitive show. UIL One-Act Play has many rounds of competition and Martin has competed in it and won for several years.  The UIL One-Act Play for 2021 was Sense and Sensibility, a show about the Dashwood sisters and their journey in the late 1700s.

“I think it all happened for a reason, but I’m still extremely disappointed that I won’t get to perform those stories,” said senior Ceili Chester, Ophelia in Hamlet cast, who was cast as Elinor in Sense and Sensibility. “The cast and crew we had assembled for those shows were incredible, and I’ll always feel the loss of not being able to compete in UIL again.”

The show was cast and started work immediately. But, once again, Covid came to the party. Too many restrictions were put in place to the point where it was nearly impossible to put on a show and still get first place. The directors  sat down and made one last final decision.

“So, with a heavy heart we dropped out of the competition for what we saw a better opportunity for all of our students,” Chambers said. “Thus, Hamlet. It involved more students and we could control how it was operated.”

Hamlet was back on. Sense and Sensibility was a no-go.

“I’m sad that we didn’t get the opportunity to put on the other shows like UIL One-Act Play,” said senior Alyssa Hart, props crew head for both shows. “I was disappointed for such a long time because we kept losing one show after the other and I didn’t know when this awful cancellation trend was going to end.”

Covid has been the biggest battle for all extracurriculars such as band, choir, orchestra, and theatre. All of these programs have been able to come up with solutions or adaptations. The band was able to have a socially distant marching band, choir had virtual performances and their first in-person concert was March 26 and 27 for Pops, Orchestra has had outside performances and rehearsals, but theatre hadn’t been able to successfully adjust.

On April 8-10, 14-17, and because of rain, 21, Hamlet was successfully performed in the fine arts courtyard. The Covid restrictions have gotten better since Covid numbers are decreasing and vaccines are being distributed, but they still aren’t the best.

“When working outside, wearing masks is difficult on a hot day,” paint crew head junior Alex Hart said. “Although wearing masks is better for everyone’s safety, it gets difficult when it’s really hot and a black piece of cloth is on your face at all times.”

Some of the restrictions that still have to be performed are in regards to the audience not so much the actors/crew. Seating was limited for Hamlet and tickets had to have been purchased in advance. Because of the limited seating, instead of doing the typical three to four showings of a performance, Hamlet had seven shows. All shows were only allowed about a 70 person audience, with a possibility of at least 490 tickets possible to be sold.

Tickets for Hamlet went live for purchase on March 26 at noon and were completely sold out by March 28 at 2:10. A full house every single night. No pressure though.

For the safety of our actors, crew members, staff, and audience, some other important restrictions were put in place on show nights:

Masks were required for all audience members upon entering the school, and during the performance. Masks were also worn by all crew members backstage but the actors did not have masks while onstage.

Contactless temperature checks were required upon entry. If anyone had a temperature of 100 or above, they would not be allowed to view the show.

Seating was limited and was spaced out at a three-foot minimum. Families and/or groups were required to sit together.

There was no gathering inside the hallways of the building before or after the show or during intermission. The cast and crew members met with the audience outside and with masks after the show once they got out of costume.

Getting the show-up and running was a fun process for the actors, as it was their first time doing anything theatre-related in over a year.

“I really missed being on the stage,” said senior Evan Clark, Claudius in the cast. “I love acting in general but doing it in costume and on the set is so much more fulfilling. I also missed just hanging out with people and having fun with the cast.”

Senior Brandon Parker, Hamlet in the cast, said he also has had the best time possible with this show.

“Doing a show like Hamlet with such a large cast, you start to form friendships that you never thought were possible,” Parker said. “I’ve made friends with everyone even down to the freshmen.”

To make a show come together, it takes many parts of one hard-working machine. The directors make script cuts and physically direct the show. The stage management team is in charge of keeping the actors on track with their blocking and lines and is in charge of making sure the crew is getting everything that needs to be done, done. The crew heads lead and teach their crews how to keep up with the directors and provide what their crew needs to provide/make to the show. Crew members follow the directions of their crew heads and create whatever is needed from their crew category. And lastly, the actors get to perform it all on stage for the audience.

Overall, Martin Theatre is a family of incredibly talented and hard-working people who will go above and beyond to make anyone feel welcome and at home, as well as put on amazing performances.

“It has been truly amazing to build friendships within the cast,” junior Amanda Kohutek said. “This new show has had everyone trying their hardest and genuinely excited to be around each other. That builds a great environment for friendship.”

“Martin Theatre has given me love and a family forever,” Shafer said. “It has shown me the good and bad and has let me learn from it. Covid has held me back from doing what I love but I know continuing to do theatre forever will make up for these lost shows.”

“Martin Theatre has shaped me to be the person I am,” set crew head sophomore Arlie Coker said. “I’m allowed to express myself physically and artistically while being surrounded by people who I love to the bottom of my heart. Martin Theatre has become my home at school and I wouldn’t settle for anything else.”

To learn more about Martin theatre, go to their website www.martinhstheatre.com