Imagine you’re sitting in class, trying not to fall asleep during a boring lecture, and suddenly a random thought crosses your mind. You walk around the school, taking a good look at your surroundings, and ponder these ideas.

We’ve all seen and heard strange things here in the MHS community, so isn’t it about time we get some answers to these burning questions?

All around Martin, paintings and murals can be found decorating the hall left and right. The fathers of chemistry, Playbills, the MLK drawing, and the big student mural at the front of Martin are all prominent art attributes found. One Martin teacher, English teacher Stacy Campbell, is contributing some new pieces to this wondrous artwork.

“What I was thinking, was how much our student body is changing, and has changed over the years,” Campbell said. “It’s very diverse now which I love. And I want to embrace that diversity by making all students feel represented in their school environment.”

Using a pop contemporary black and white style, Campbell is depicting iconic portraits on 4 by 5 foot canvases. The completed paintings are going to be placed randomly above water fountains around Martin, making them visible to all students.

As of now, Campbell has finished her first painting of poet Amanda Gorman, and hopes to soon complete one of Pakistani education activist Malala Yousafzai. By the end of the year, Campbell plans on completing five portraits to be displayed around the school.

“I thought that since I am a painter, my artwork could inspire students to be like these influential people,” Campbell said. “I want to depict people who are motivational and just have good solid core qualities while looking different, and I don’t want everybody to be cookie cutter.” 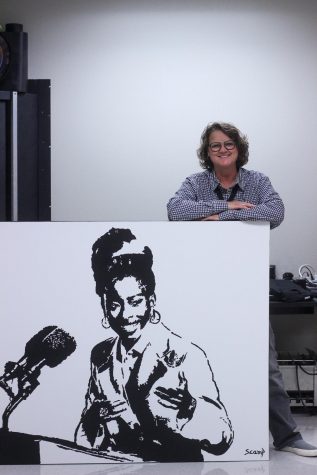 Suppose you’re like senior Lilly Griffiths, who suddenly woke up one sunny Saturday morning to her front yard covered in pink plastic flamingos. Flocking, is what they call it.

“At first I was confused as to why there were flamingos invading my lawn, and when I went to ask my mom she told me about what it meant,” Griffiths said.

Flocking is a fun fundraising tactic for Bahama Bash, the after-prom party for every senior class. The Bahama Bash board, run by the class of 2022 senior parents, sends out a party of volunteers to flock to senior houses. At $25 a flock, anyone can purchase a senior their own flock of flamingos to live in their yards.

“Flocking is a Bahama Bash fundraiser that helps pay for all the after-prom needs such as prizes, decorations, and the venue rental,” Bahama Bash volunteer senior Ally Little said. “There are specific numbers of flamingos for each house purchased and five groups of the same flamingos that get moved from house to house.”

Another one of the many Martin wonders, could be something you heard occasionally in the hallway, class, or at rehearsal. “Thank you!” is shouted by just about every member of the Theatre department about 100 times a day. Thank you? Thank you for what exactly?

Theatre director Jordan Chambers explained what these “thank yous” are.

“Theatre thank yous are an acknowledgement of instruction or direction given by a director or crew head,” he said. “They’re a way to confirm that something has been heard or understood so that there’s not any miscommunications. It’s also a way to respect one another in positions of authority.”

Begun by the original Martin Theatre directors Lary Cure and Sharon Miller, “thanks yous” have been a sacred Theatre tradition for decades now. Cure and Miller had put the law into place so that their tech crews would start to show more professional respect towards one another. Nowadays, you can hear the habit phrase from most of the Theatre members not just in rehearsal, but in other classes too.

“There’s a thing we do in theatre where if there’s something above you and we need to bring it down on stage we say, ‘Heads!’ and the proper response would be ‘Thank you!’ so that we know that you’ve heard that there is something coming down,” Chambers said.

Think long and hard about the one uber-stereotypical thing about high school that is almost rarely seen in real life. You guessed it, lockers. In every single Disney TV show or any teen coming-of-age movies, there are almost always some iconic scenes played out in the school hallways, next to open lockers.

Has anyone ever even seen a student using any of the lockers here at Martin? Well, some sure do.

Attendance clerk Nina Fink  has the very important job of keeping up with these lockers. Fink knows the very reason why students rarely use these metal boxes.

“Because of the size of Martin, students just don’t have the time to go to their lockers, get their belongings, and make it on time to class,” she said. “However, lockers are still available on request for anyone even though most teachers use a few here and there for storage.”

Currently, a large portion of the lockers have been removed from the halls over the years. And the theme of students not really ever using lockers, has apparently always been a thing at Martin.

“I don’t think the lockers were ever really used as commonly here as they’re seen in Hollywood,” Fink said. “Films just over-dramatize the idea of high school and now, the remaining lockers don’t serve much of a purpose rather than just being there.”

Now while this sighting is not uncommon at MHS, but the story behind him is quite an attention-grabber. Everyone knows him, the man, the myth, the legend: head football coach Bob Wager. When you think of Coach Wager, what comes first to mind? Is it football? Is it his deep, booming voice hyping up the student body during the pep rallies? Maybe, you might think of his bald head.

Sure, being bald isn’t a rare sight. But what is rare, especially for men, is the fact that Coach Wager willingly shaves his natural luscious hair to stay bald.

“In high school, I was a competitive swimmer so I was given the choice when I went to regionals to either swim with a cap or shave my head,” he said. “I chose to shave it, and later during my freshman year of college football, I shaved it again for helmet comfort and for the fact that the heat was so bad. Since then, it’s been the best idea I’ve come up with.”

Wager said that a couple of years ago, he did in fact grow out his hair for a period of time. In a bet against a former football player Serrell Brown, Wager grew out his hair while Brown shaved his. Even so, Wager’s feelings about his hair are strong.

“Obviously, I have plenty of hair,” he said. “My mindset when I do have hair is, ‘How fast can I get this hair off me?’ Honestly when I do have hair, I feel anxious with its presence. But once it’s been removed, I am immediately happy and content.”

While the seven wonders of the world may boggle some minds, these five wonders of Martin are sure to satisfy the random mid-class daydreaming thoughts we’ve all experienced. However, these fun facts may simply be the icing on the cake for the huge recipe Martin High’s many secrets.